This week we celebrated the 10-year anniversary of the Institute for Protein Design. Current members, advisors, supporters, and old friends all came together on campus to share memories and forge new friendships. It was a night to remember.

A lot has changed in the past decade. At our founding, the concept of protein design was largely unproven. We believed that a new world of useful proteins could one day be built, but we could not imagine the breadth of projects and successes that would followed. Many of our original team members have moved on to other places, and we have welcomed hundreds of new colleagues into the fold. But one thing has always remained unchanged: our commitment to excellence in research.

It has been a thrilling 10 years, full of discoveries and breakthroughs. We have made great progress in our mission, including by launching our first approved medicine, and we look forward to continuing our work for many years to come. Thank you to all of our supporters, old and new, for helping us make this work possible. 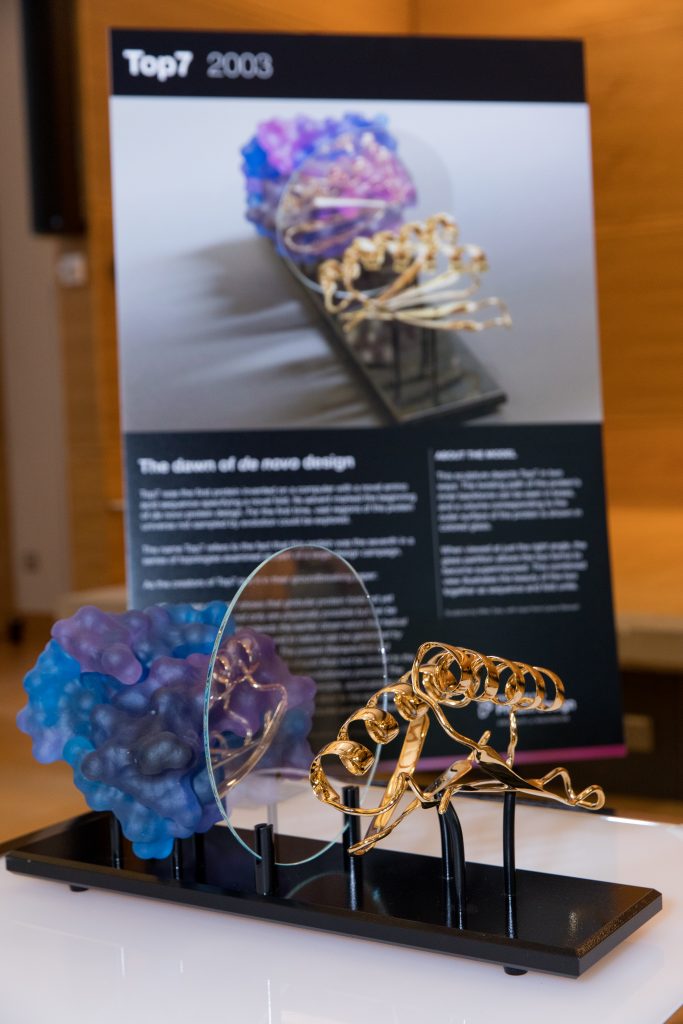 At the party, we debuted a new sculpture of the protein Top7 made by former Baker lab member and artist Mike Tyka and his collaborator Jeanne Ferraro.

Top7 was the first protein invented on a computer with a novel amino acid sequence specifying a novel fold. Its advent marked the beginning of de novo protein design. For the first time, vast regions of the protein universe not sampled by evolution could be explored.

The sculpture depicts Top7 in two ways: The twisting path of the protein’s inner backbone can be seen in brass, and a volume corresponding to the outer surface of the protein is shown in colored glass. When viewed at just the right angle, the glass partition allows the two forms to become superimposed. This combined view illustrates the beauty of the two together as sequence and fold unite.

The name Top7 refers to the fact that this protein was the seventh in a series of topologies examined as part of a larger design campaign.

As the creators of Top7 put it in their groundbreaking paper:

“The design of Top7 shows that globular protein folds not yet observed in nature not only are physically possible but can be extremely stable. This extends the earlier observation that helical coiled coil geometries not found in nature can be generated by computational protein design. The protein therapeutics and molecular machines of the future should thus not be limited to the structures sampled by the biological evolutionary process. The methods used to design Top7 are, in principle, applicable to any globular protein structure and open the door to the exploration and use of a vast new world of protein structures and architectures.”

Posters from the event