Millions of children will visit hospitals this year, sickened by RSV. Infection is usually mild, causing only fevers, runny noses and frightened parents. But, in severe cases, barking coughs and painful wheezing can indicate serious respiratory complications, including bronchiolitis and pneumonia.

RSV is the primary cause of pneumonia in children under one and is therefore the leading cause of infant mortality worldwide after malaria. Although virtually every child on Earth will get RSV before the age of three, an estimated 99 percent of RSV deaths occur in developing countries. Despite substantial effort, there is not yet a safe and effective vaccine.

Today, an international team of scientists co-led by researchers at the IPD report in Cell a first-of-its-kind vaccine candidate for RSV. It elicits broadly neutralizing antibodies against respiratory syncytial virus in mice and monkeys, paving the way for human clinical trials.

Researchers in the King lab created the new vaccine candidate by fusing a stabilized version of RSV F, a glycoprotein from the virus responsible for membrane fusion, onto their designed two-component protein nanoparticle platform. This yielded a self-assembling vaccine that can be tuned to display a variable number of antigens by stoichiometrically mixing different versions of the purified parts. 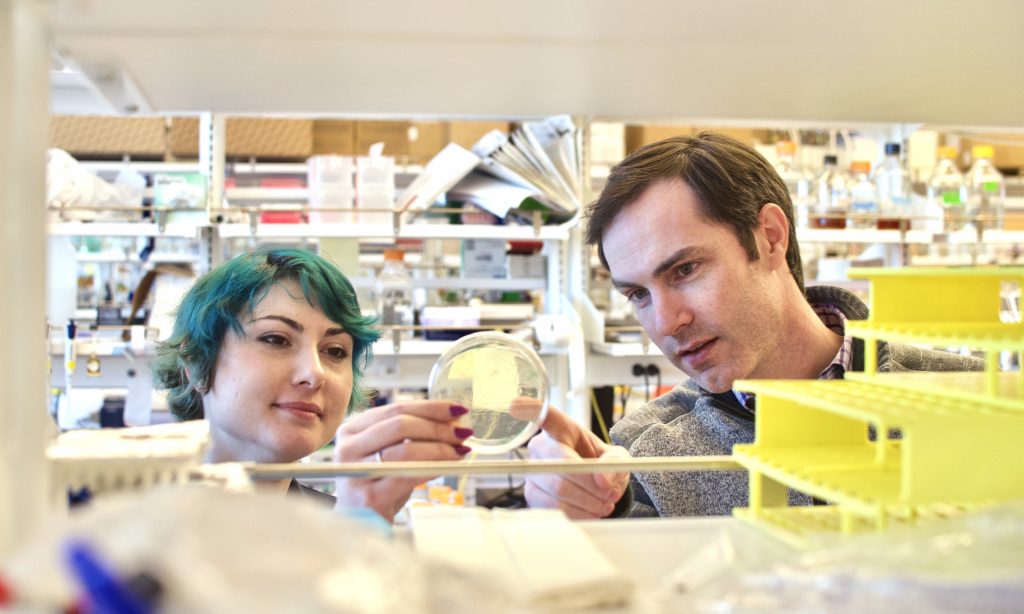 Vaccine researchers Brooke Fiala and Neil King in the lab.

Because the core of this vaccine consists of an computer-generated, ultrastable nanoparticle, this multivalent vaccine candidate — dubbed DS-Cav1–I53-50 — is more stable than the trimeric antigen (DS-Cav1) alone. DS-Cav1–I53-50A exhibited no discernible loss in antibody binding as measured by bio-layer interferometry after being stored for two weeks at 37°C relative to -80°C. This extremely high stability may ultimately translate into a vaccine that does not require refrigeration, greatly reducing the cost and complexity of global vaccine distribution.

DS-Cav1 is a prefusion-stabilized variant of the F glycoprotein trimer developed at the National Institute for Allergy and Infectious Disease Vaccine Research Center at the National Institutes of Health that has elicited significantly higher neutralizing antibody titers than postfusion F in naïve mice and non-human primates, cattle​ and, most recently, healthy adult humans. DS-Cav1 is itself being evaluated in a Phase 1 study by NIH as an RSV vaccine candidate. The new nanoparticle vaccine based on DS-Cav1 was ten times more potent than DS-Cav1 alone, suggesting it may translate into a more effective vaccine with more durable protection.

The first of many

“This is the first of many vaccine candidates we have made using this technology,” said senior author Neil King. By swapping out the proteins along the outside of the nanoparticle, King and his team hope to create new vaccines candidates for HIV, malaria, and even cancer.

The RSV vaccine team was led by researchers at UW and the Institute for Research in Biomedicine in Bellinzona, Switzerland. It also included scientists from the Fred Hutch Cancer Research Center in Seattle, USA; the Karolinska Institute in Stockholm, Sweden; the Vaccine Formulation Institute in Godalming, UK; the European Virus Bioinformatics Center in Jena, Germany; the Vaccine Formulation Laboratory at the University of Lausanne, Switzerland; and the ​Institute of Microbiology at ETH Zürich, Switzerland. The project was funded in part by the Bill and Melinda Gates Foundation.