Today we report in Nature the design and initial applications of the first completely artificial protein switch that can work inside living cells to modify—or even commandeer—the cell’s complex internal circuitry.

“In the same way that integrated circuits enabled the explosion of the computer chip industry, these versatile and dynamic biological switches could soon unlock precise control over the behavior of living cells and, ultimately, our health,” said Hana El-Samad, the Kuo Family Professor of Biochemistry and Biophysics at UCSF and co-senior author of the reports.

LOCKR is made of multiple parts. One chain, called the Cage, sequesters a bioactive peptide. Binding of a second molecule, called the Key, to the Cage causes a change in conformation, exposing the peptide. By swapping out the identify of the caged peptide and by tuning binding affinities, different LOCKR switches can be created for a wide range of signaling outputs. 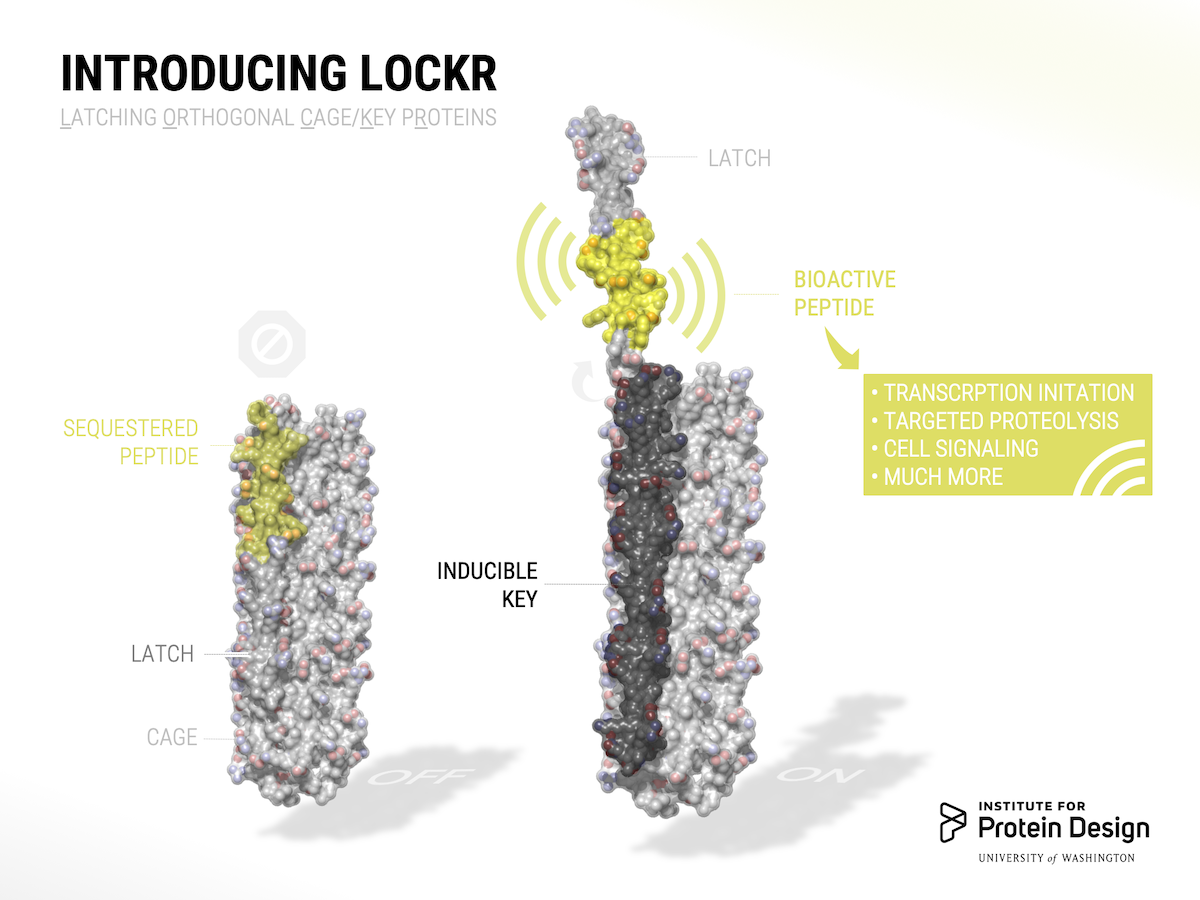 LOCKR can be used to modify gene expression, redirect cellular traffic, degrade specific proteins, and tightly interface with natural proteins. Together with our colleagues at UCSF, we also built new biological circuits that behave like autonomous sensors. These circuits detect cues from the cell’s internal or external environment and respond by making changes to the cell, just as a thermostat senses ambient temperature and directs a heating or cooling system to shut itself off when a desired temperature is reached.

The lead authors of the reports are Bobby Langan and Scott Boyken of the IPD and Andrew Ng of the UC Berkeley-UCSF Graduate Program in Bioengineering. Both Bobby and Scott have gone on to research positions at Lyell.

“Right now, every cell is responding to its environment,” said Bobby. “Cells receive stimuli, then have to figure out what to do about it. They use natural systems to tune gene expression or degrade proteins, for example.”

Bobby and colleagues set out to create a new way to interface with these cellular systems. They used Rosetta to create and tune LOCKR, testing their tool first in vitro then in vivo.

“LOCKR opens a whole new realm of possibility for programming cells,” said Ng. “We are now limited more by our imagination and creativity rather than the proteins that nature has evolved.”